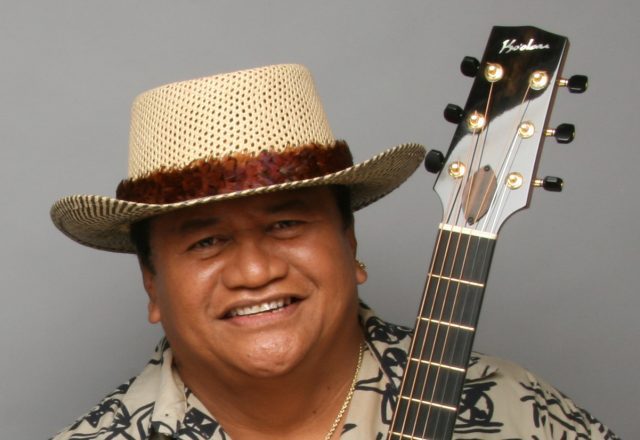 Led Kaapana’s mastery of stringed instruments, particularly slack key guitar, and his extraordinary baritone and leo ki`eki`e (falsetto) voices, have made him a musical legend. He has been thrilling audiences for more than 40 years. With easy-going style and kolohe (rascal) charm, he has built a loyal corps of Led Heads from Brussels to his birthplace on the Big Island of Hawaii. Recognition by his peers earned Led 4 Grammy nominations in his own right and 2 wins on slack key compilations.

Like so many Hawaiians, Led grew up in a musical family. In the tiny black sand bay village of Kalapana, there were few distractions. “We didn’t have electricity, no television, not even much radio,” says Led. “So we entertained ourselves. You could go to any house and everybody was playing music.”

Often everybody was playing music at a backyard party, many of which lasted for days. “People played in shifts, taking over when somebody went to sleep,” Led recalls. “You’d fall asleep to the music, wake up….and the music was still playing. That was the best alarm clock I ever had!”